It is the absolute best trip ever… 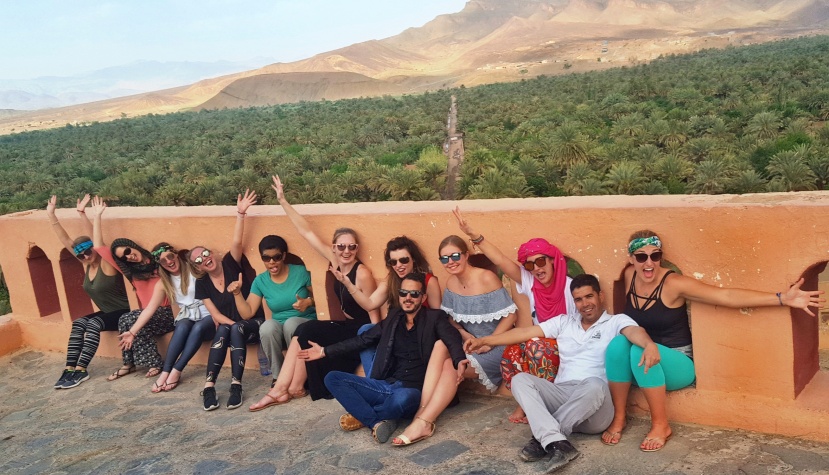 Who would have thought booking a fluke airfare months ago would turn into 9 other women jumping on board for a trip to Africa, primarily to ride camels into the desert?

I’m so thankful that they did, and think everyone else should too.

Before I get to that, I would feel terrible if I left out the beginning of the trip in Barcelona. I am pretty much in love with that city and convinced I want to live there at some point in my life.  We nerded out and did a couple of walking tours of the city, my favorite being an architecture tour.

Who knew Gaudi’s Casa Batllo is actually built to represent the story of the patron saint of Catalonia. The tale goes that there was a dragon that frightened a town so much that they would feed it a person a day to make it happy. One day it was the princess who was drawn to be sacrificed. Well St George wasn’t having that and rode up on his white horse and slayed the dragon with his sword, and where the blood dripped a red rose-bush grew.  St George obviously picked a perfect red rose and gave it to the princess. Standing in front of the building and hearing this story it actually makes perfect sense.  The roof is the dragons scales, the cross being the sword used to stab it.  The princess’s balcony is at the top where she was rescued, and the windows look like skulls of the previously sacrificed poor souls. The colorful broken tiles and thrown on the facade represent the roses. It’s obvious, right?! 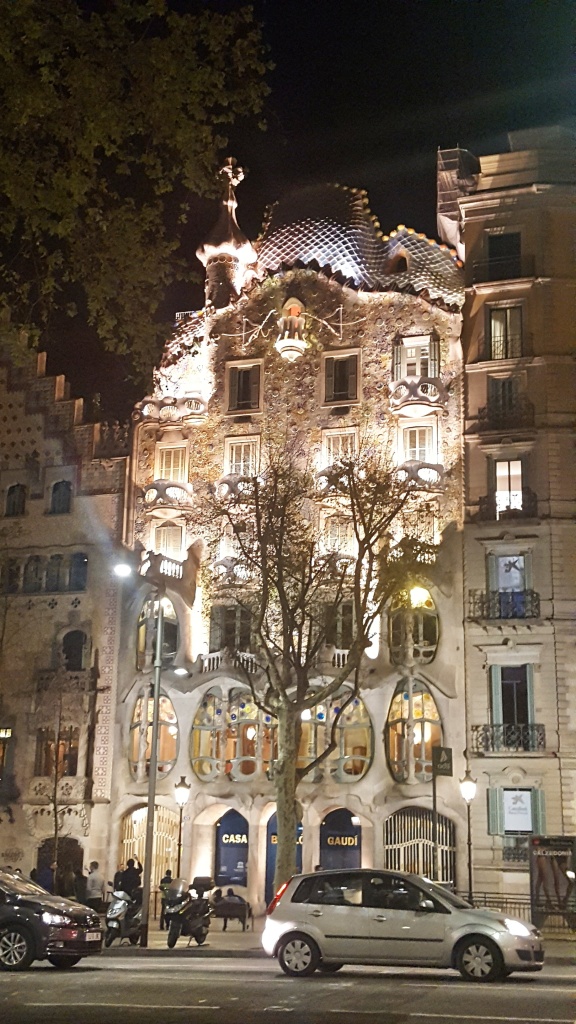 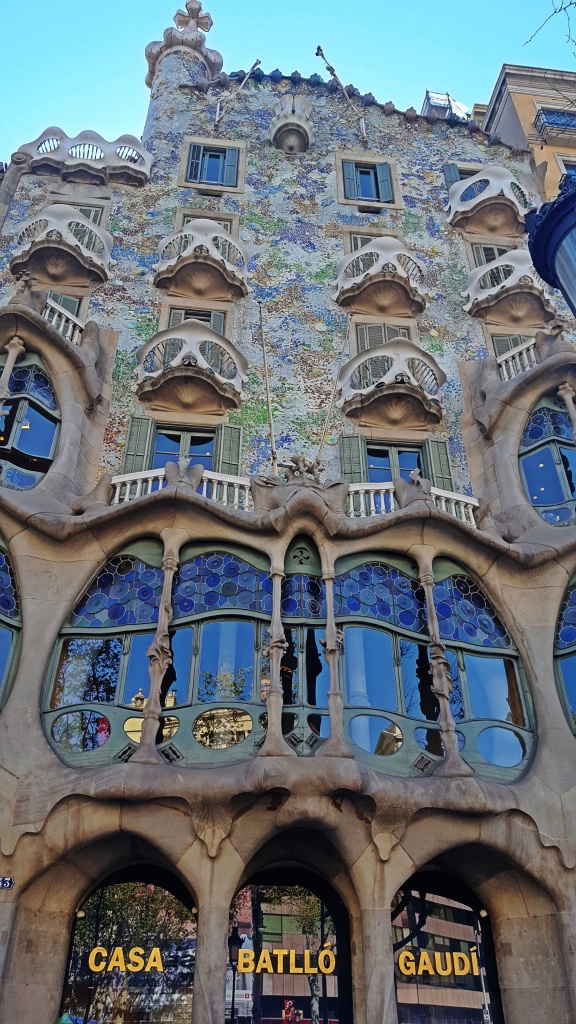 Also obvious, is that the Sagrada Familia was his masterpiece. The stories of him hoisting a donkey up as to perfectly depict it while sculpting just one very small scene of the nativity side of the basilica shows to what lengths his perfection went.  Construction began in 1882, Gaudi died (tragically by being ran over) in 1926, and the building is set to be finished in 2026.  I shall be back to see the finished building as it is absolutely jaw dropping.  Especially if you see all 4 sides (ahem the 4 girls who thought they saw it, but completely missed the finished Gaudi side.) 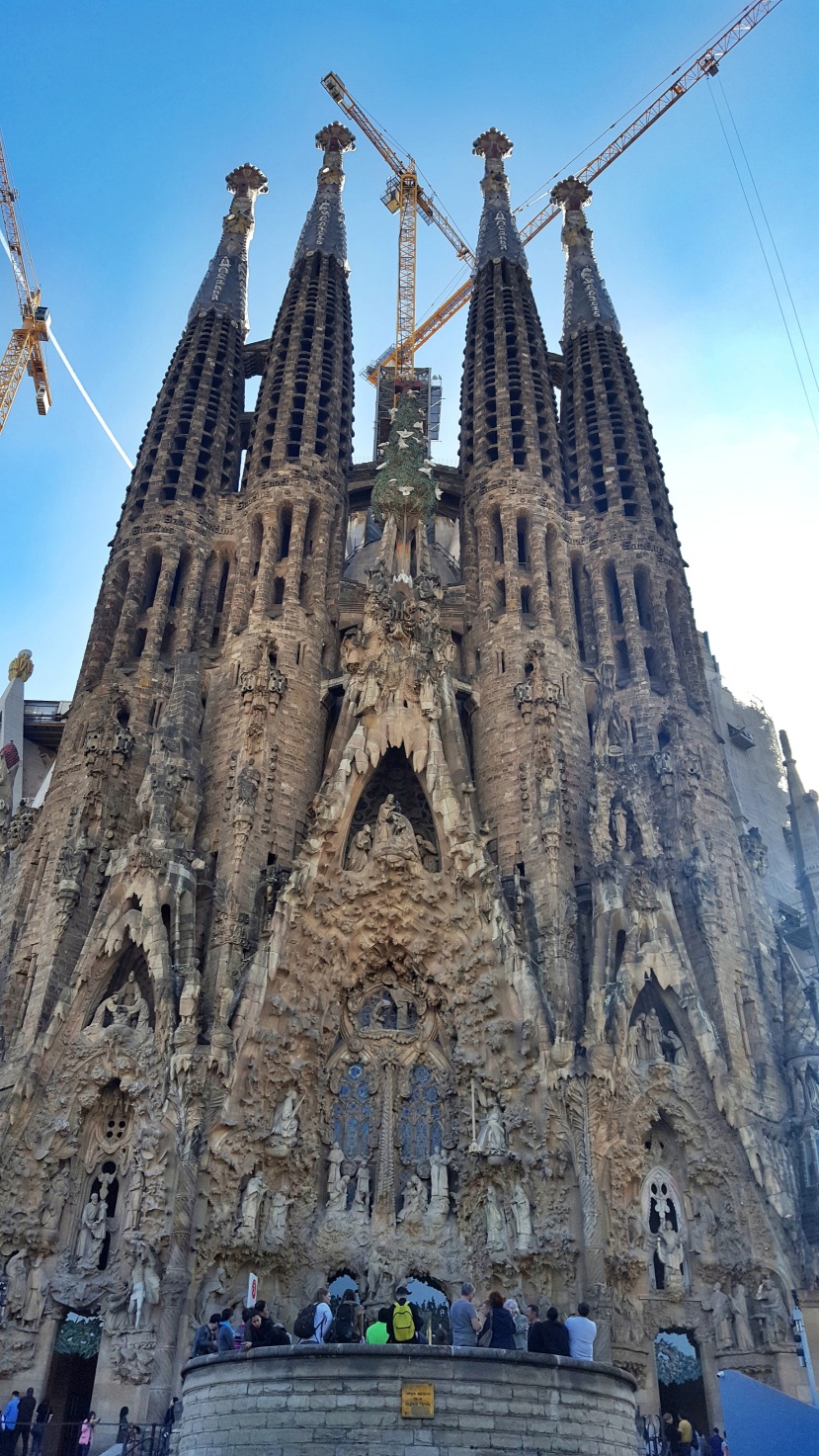 I told you I nerded out.  But, we also drank a ton of the delicious nectar of the gods, spanish sangria, and ate Paella and meat and cheese. Our penthouse view for 2 nights wasn’t terrible either and I’m happy to say we took full advantage of it while still exploring the city and doing all the things we could cram into our 2 nights on the front end and 1 night on the back-end of the trip. 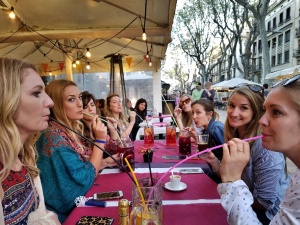 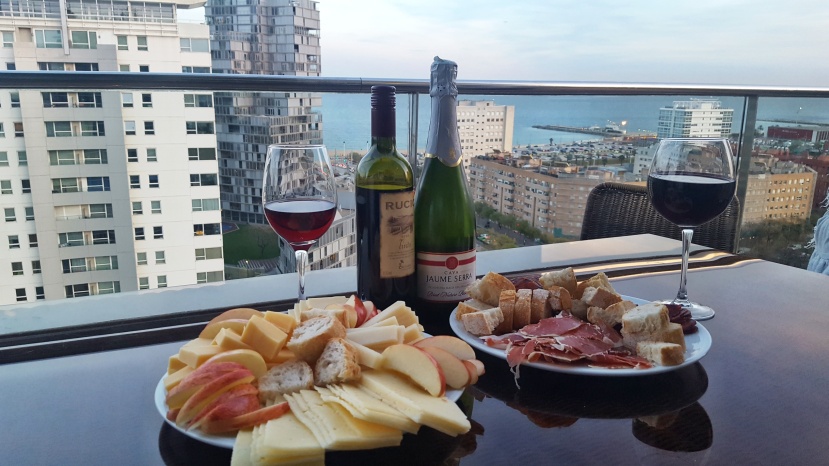 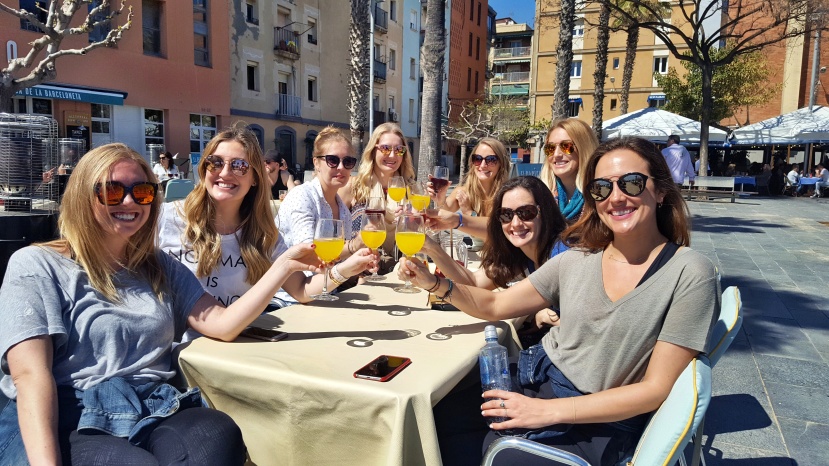 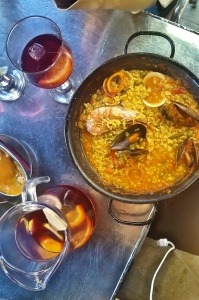 The main event though…. Morocco.

I’m pretty opposed to booking multi-day tours and having an itinerary mapped out, but I am SOOOOOOOOO thankful that we booked our 5 night tour with Mbarek and OverMorocco tours. I’m 100% sure we wouldn’t have had the best trip ever without Mbarek and Moha, our fearless leaders. Bless their hearts.

We started by staying in the Medina, the old part of the city, in Marrakech.  This labyrinth of buildings and riads (old homes converted into hotels/bed and breakfasts) is full of life, and chaos.  There are stands selling anything you could ever want pretty much everywhere. And lets talk about the Jemaa el-Fnaa market place.  I read somewhere before the trip that if you think the Ringling Bros was the greatest show on earth, you haven’t been to Jemaa el-Fnaa.  I agree, that is the craziest single place I’ve ever been.  After a lovely day spent touring the king’s palace from the 17th century and seeing the detailed tile work for his 4 queens quarters, the gardens, and the decorative tombs and final resting places…. we weren’t ready. Sitting through a private demonstration about argon oil, spices, beauty products, and doing a little casual shopping was no prep for the market. 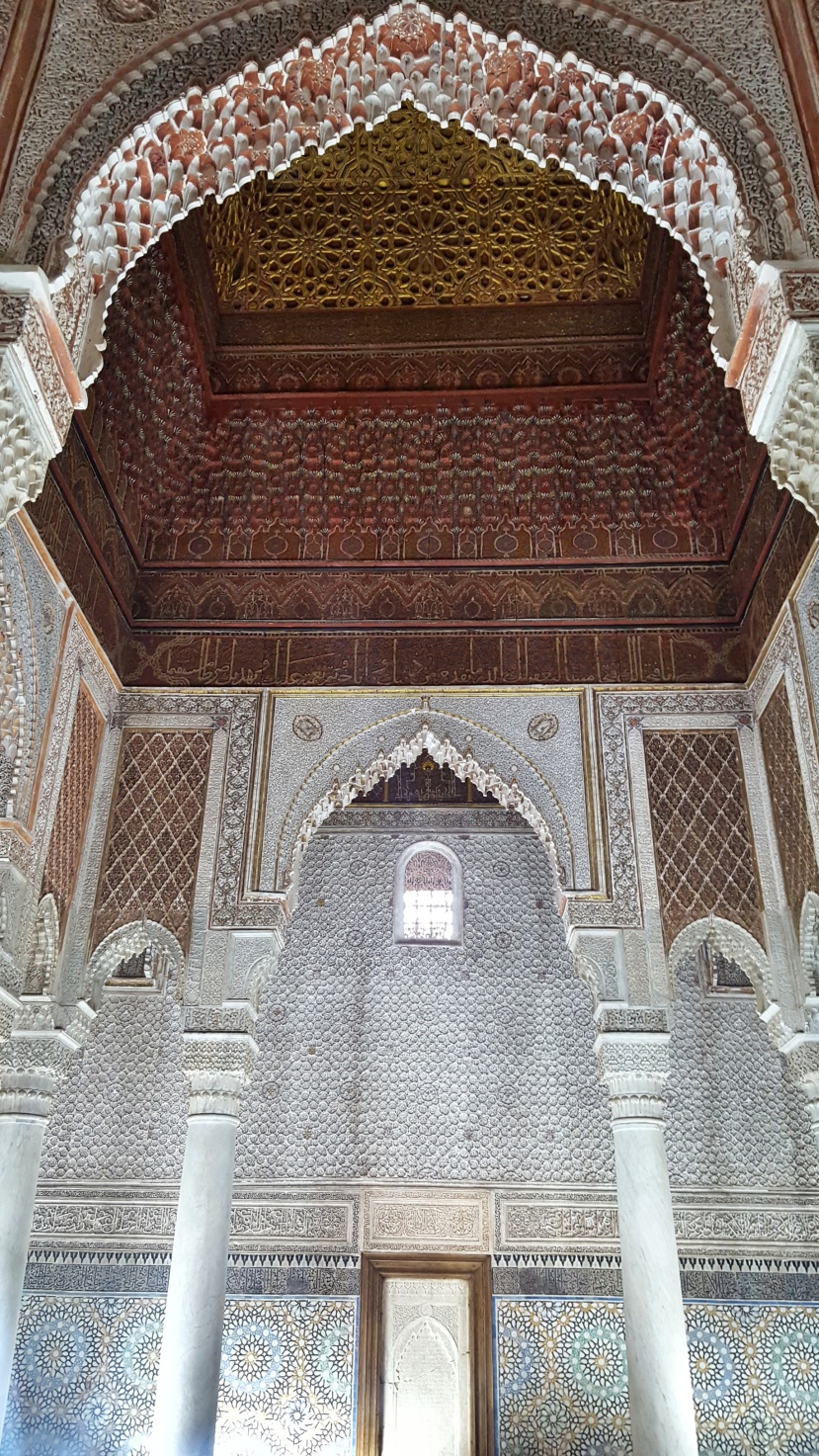 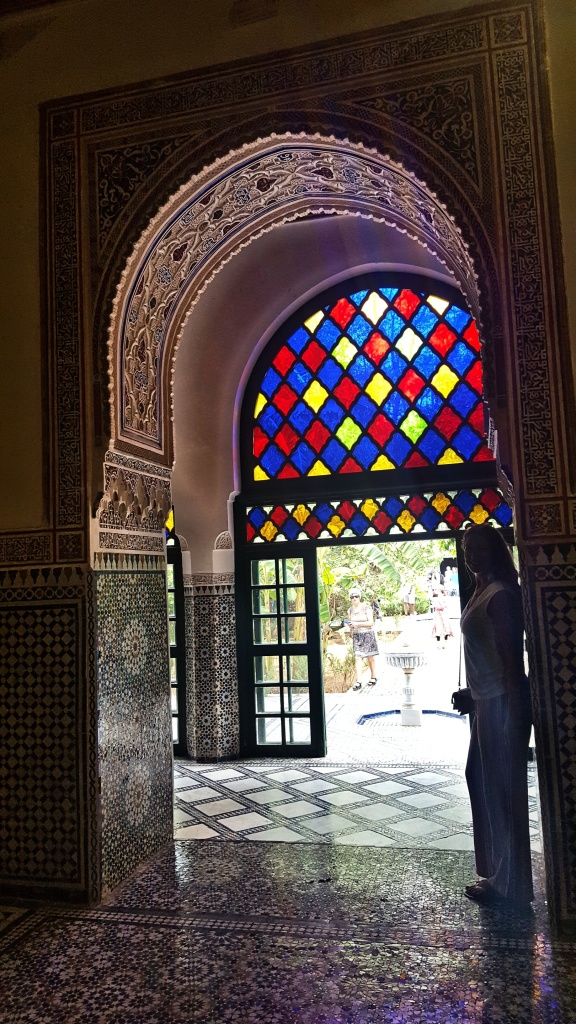 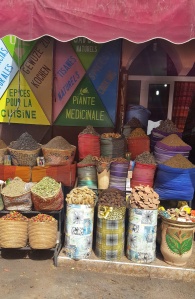 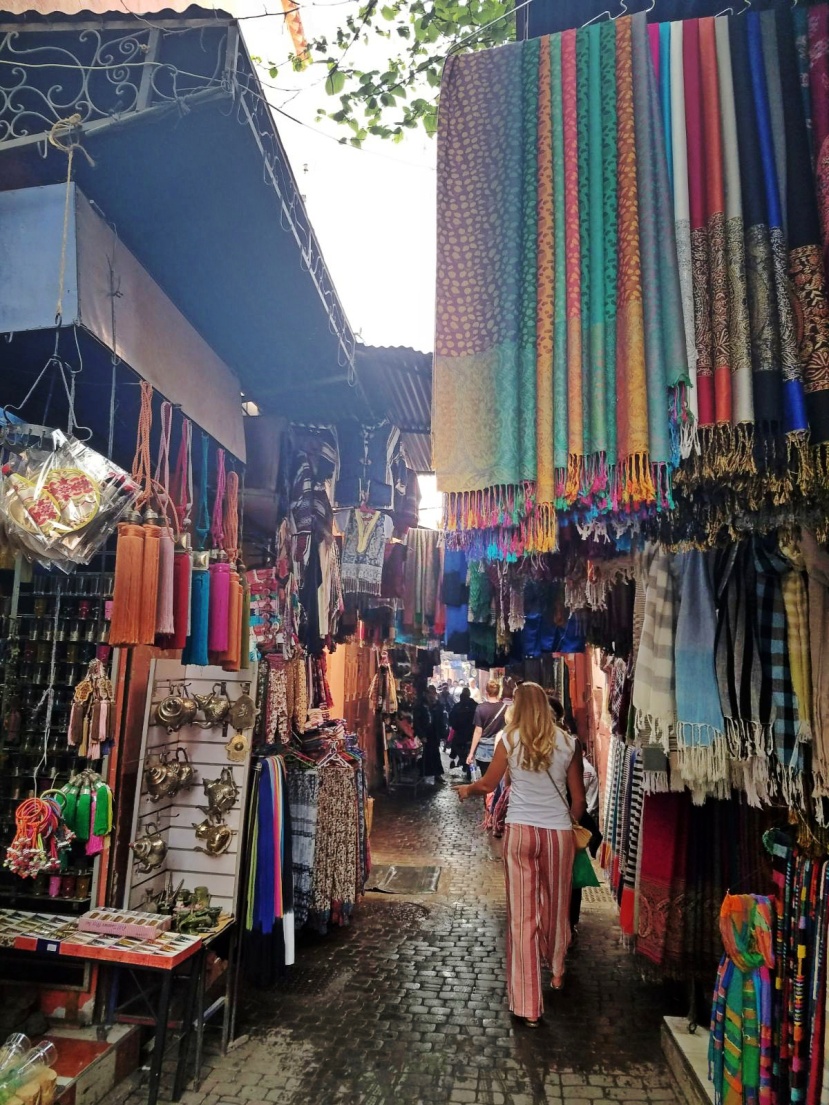 To start with, snake charmer are real.  The sit there with their cobras until a tourist walk up and begin playing… and the snake really is charmed and starts to rise and move.  That’s all fine and dandy, but no one warns you about the hundreds of hawkers walking around with snakes trying to throw them over your shoulders.  Because once they do that, you gotta pay them. It was so overwhelming that one snake was thrown over Robin’s shoulders and 2 men started arguing (in another language mind you) about whose snake it was and who would get the money I guess. They were tightening the snake around her neck from both sides.  I’m watching terrified for her, and a snake gets thrown over my shoulders after I repeatedly said no.  tooth-pullers are real, henna tattoos on the side of the street is real, every kind of food you can imagine being cooked in a stand is real, and men walking by grabbing your butt is also very real.  A group of 10 American women (modestly dressed mind you) walking around apparently gives them permission to walk up and brush by our bodies, or just flat our grab a tushie. Inappropriate comments about ‘is it real’ or ‘how much’ were also made to multiple girls.  Keep in mind, long dresses, linen pants and t-shirt, joggers…. these were the non-provocing clothes we were wearing. 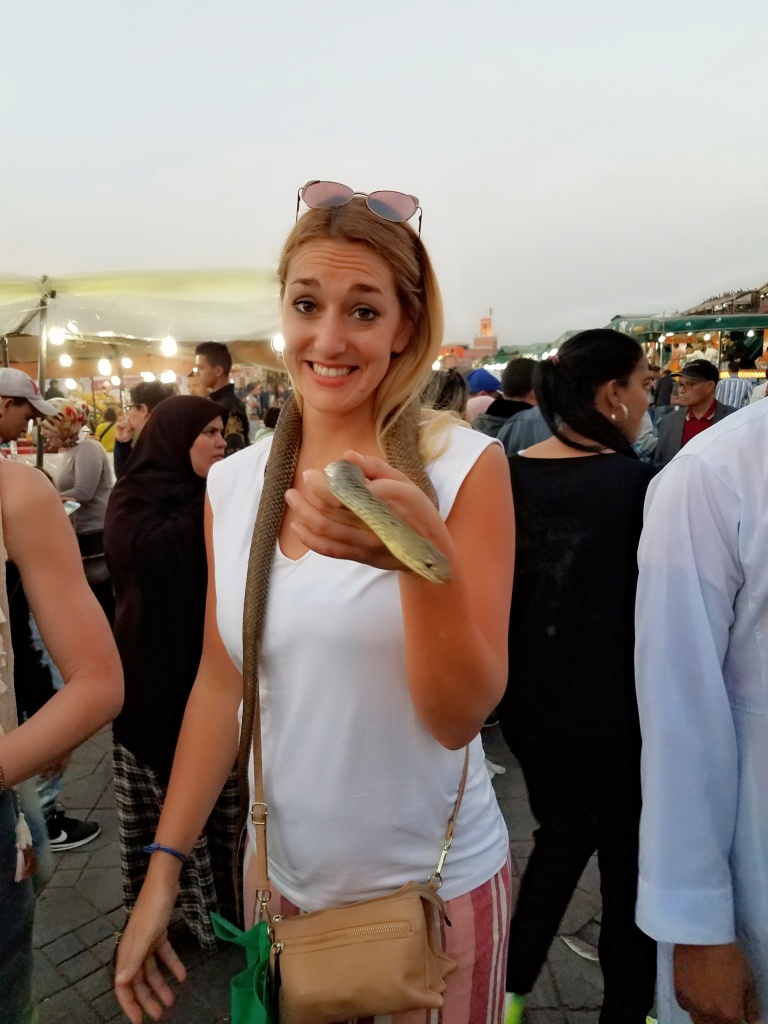 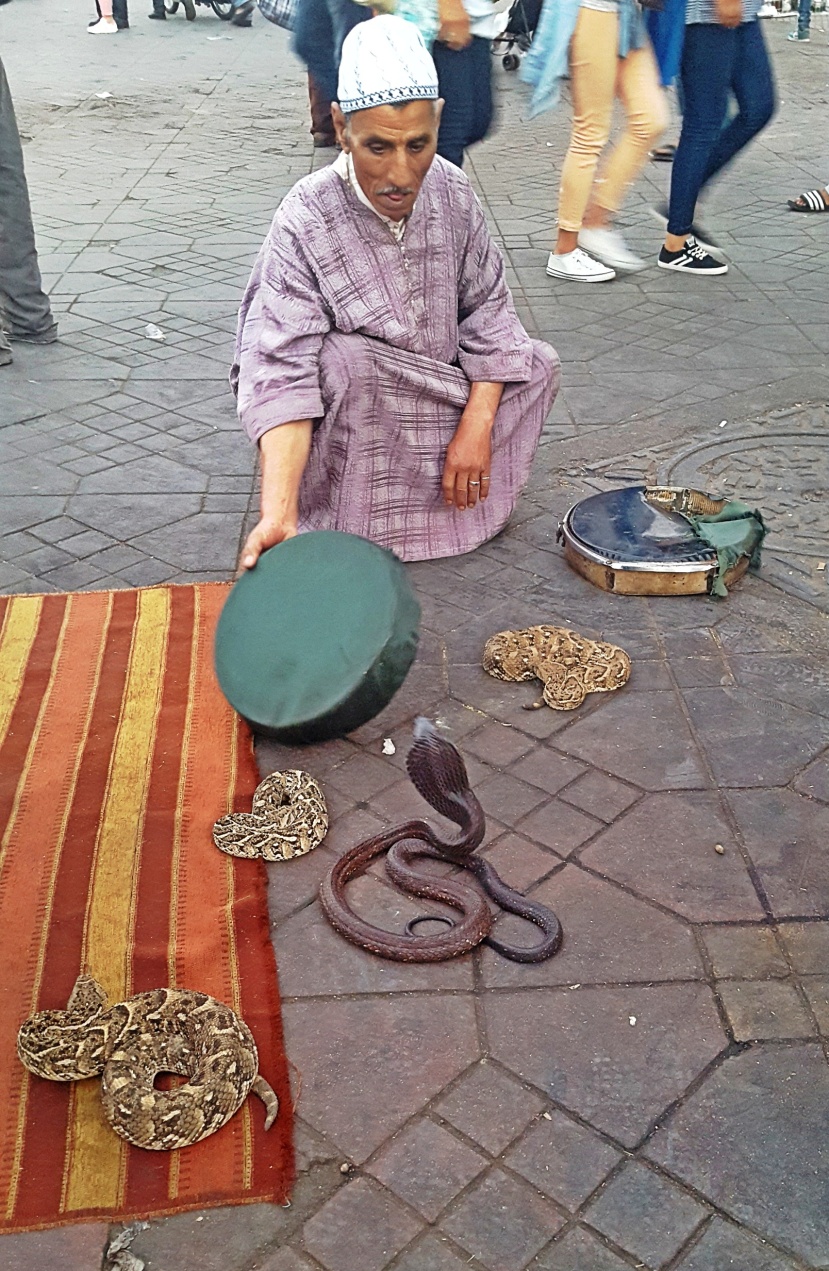 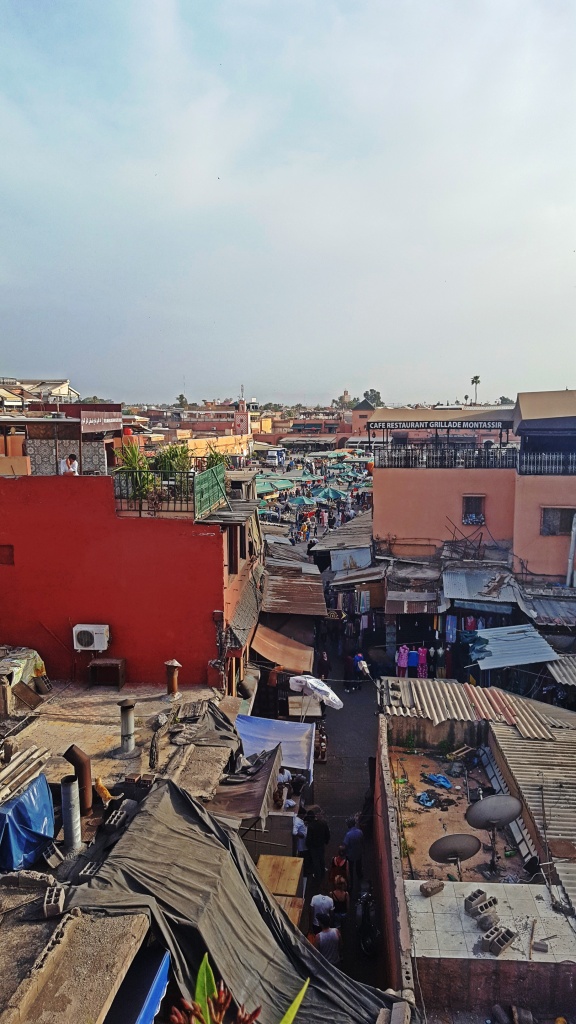 I am still scarred from that marketplace.  But, you gotta go if you ever visit….  once. And go early in the evening, that was our mistake.

Our tour started by driving through the Atlas mountains through the (still snow capped) Tizi-n Tichka pass.  A pass that Berber tribes, the indigenous people of North Africa, who still speak their over language and are 70% of the population of Morocco (according to my Berber tour guide), have traveled through for decades. Electricity and modern conveniences… such as paved roads, only reaching the area in the past couple of decades.

We visited a Kasbah, or small town, on this day as well.  Houses were built close together for generations of families and are identified by having 4 towers (to provide protection) and 4 stories high.  The craziest part, they’re made out of clay and straw.  We were standing on the terrace of a 4 story high mud building from the 1700’s. Whhhhaaaa?! That night we joined an African band… whether they wanted us to or not.  Jessica stole the metal spoon instrument from a chinese man while we were having dinner & listening to the band at our hotel, and the rest was history.  Next thing I know I was holding a blower for the fire as a limbo stick and Mr. Chinese man (from Toronto) was limbo-ing under it, along with a table of senior citizens.  A traditional african dance conga line came next, and then we joined the band.  I can’t make this stuff up… 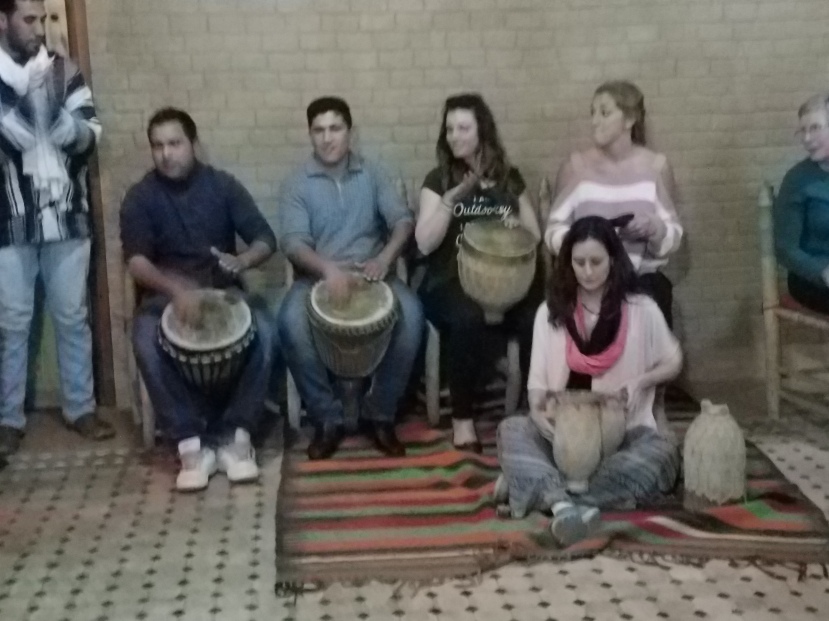 Next day…  road trip to Merzouga and the SAHARA DESERT!!!!! Along the way we stopped at a nomad camp.  This is exactly how it sounds, people moving around trying to find places with water to set up camp for an undetermined time.  This camp actually had electricity and had been there for 4-5 years, I can’t remember.  Dont get it twisted though, making goat milk by using an animal skin tied between 3 sticks so It can be moved back and forth and therefore mixed, proved that modern conveniences are not something these people can afford. 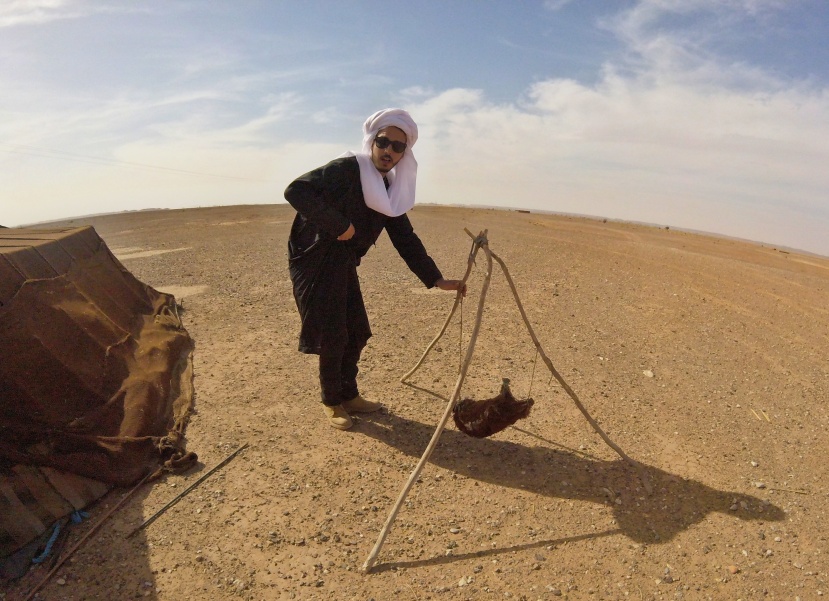 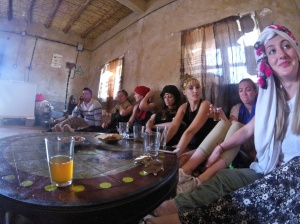 THE DESERT!!!!!  We packed our overnight bags, hopped on a camel and were off.  Tied together and led by our fearless leader, Ahmed, into the desert.  We rode maybe an hour through the sand dunes, having no idea how he knew which direction to go, until we reached a spot where he stopped and we got off our camels.  After walking up one of the dunes (or mountain as Jessica called it) we saw our camp for the night set up below.  A circle of tents with a picnic table in the middle was home, and we watched the sunset from the dunes before Ahmed cooked our typical tagine dinner.  Which we added lots of wine, and then tequila to. This could explain why we stayed up most of the night, and continually rolled down the sand dunes like small children (Ashley, that’s all on you…).  Seriously, socks and pants pockets FULL of sand were found the next morning.  Our guides and hotel host joined us, and one of my favorite memories from the trip was sitting on top of a sand dune in the desert laughing with everyone and just having the best time ever.  As pretty as the sunrise was the next morning, we paid for our evening shenanigans. 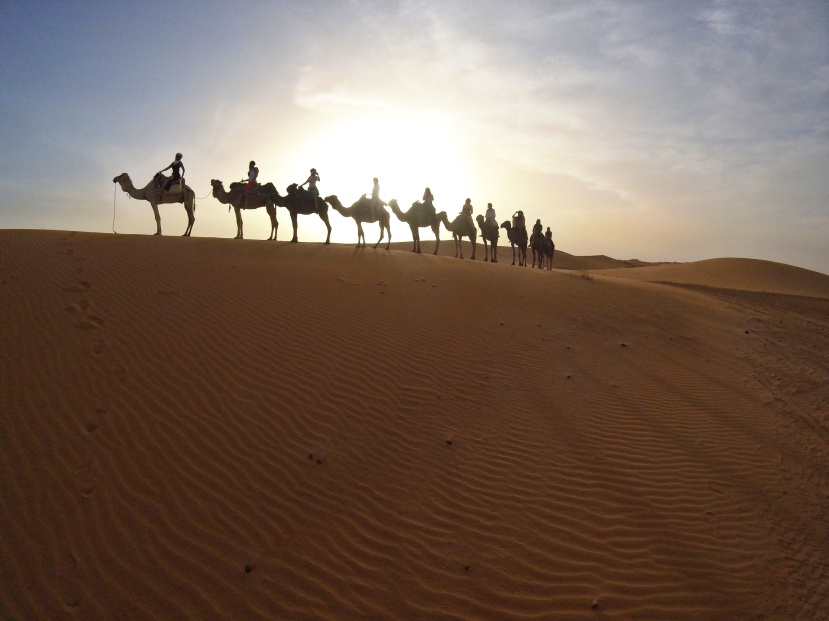 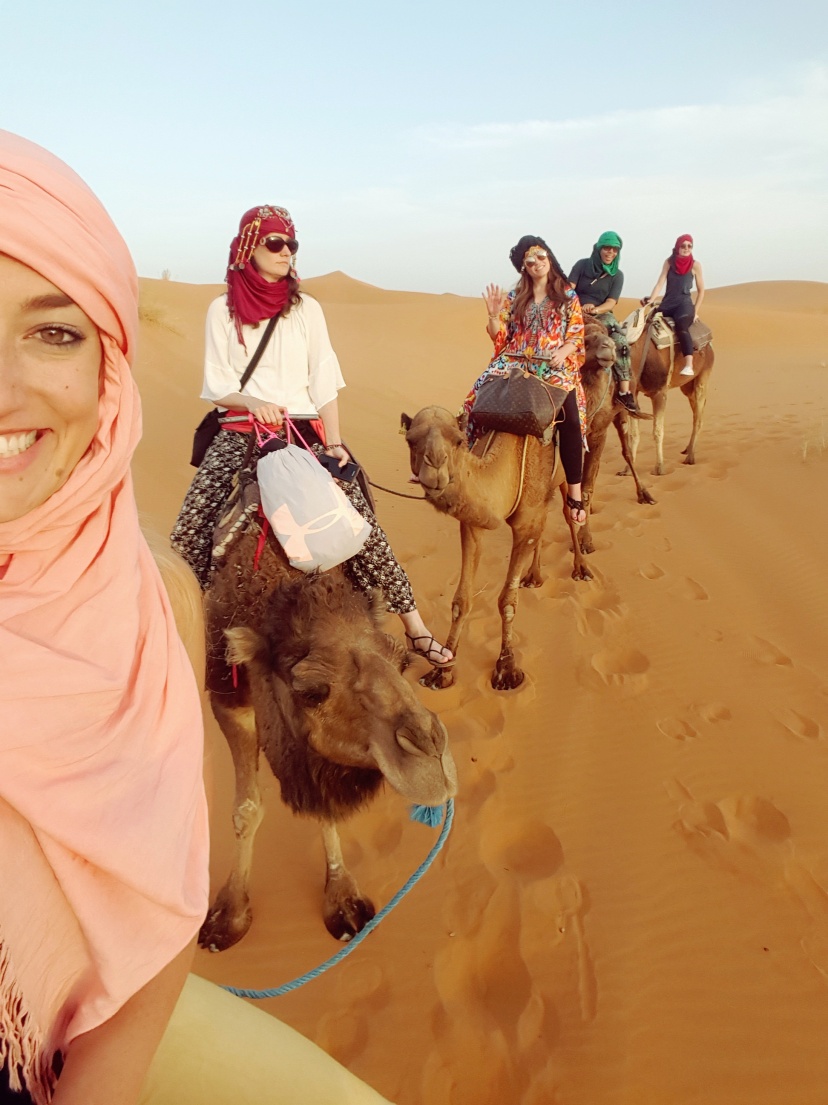 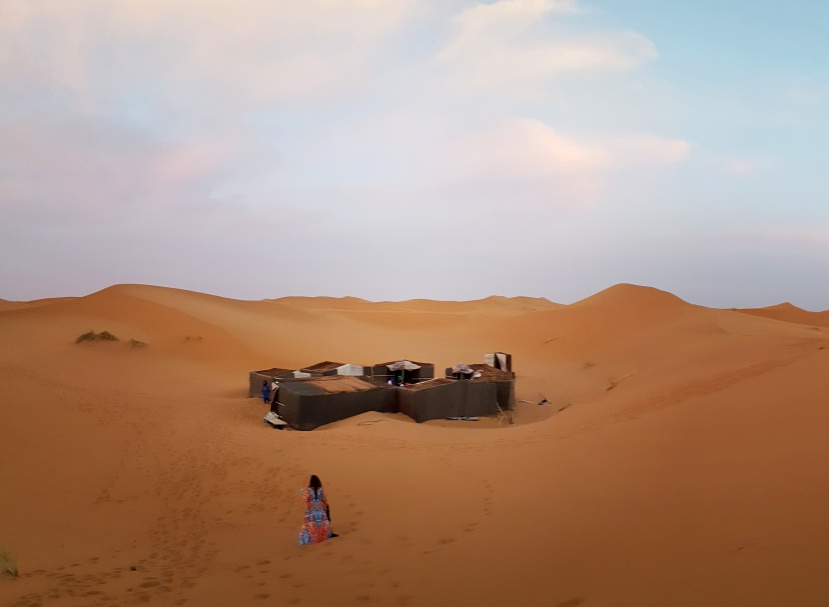 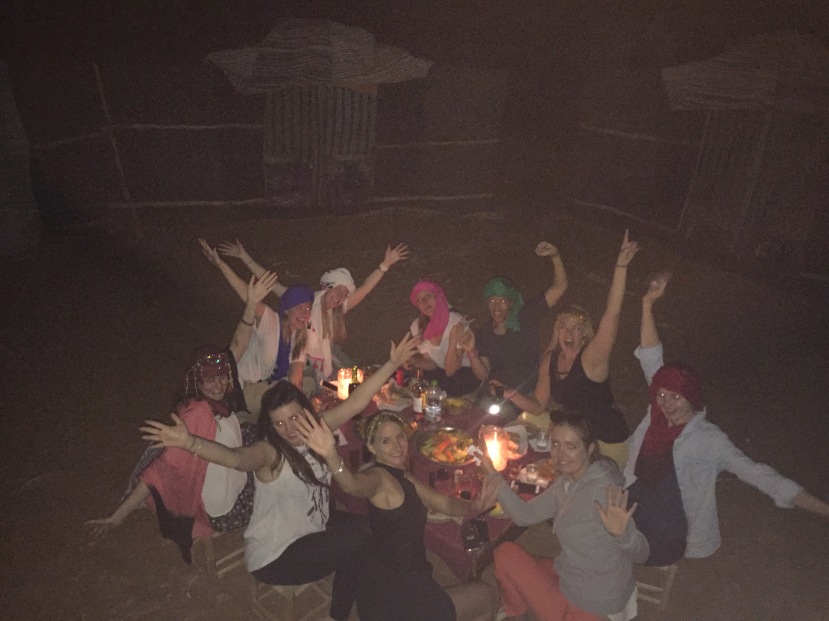 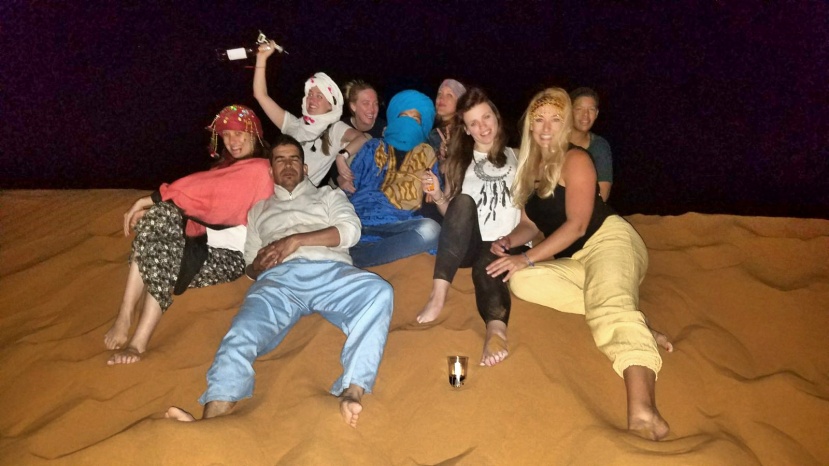 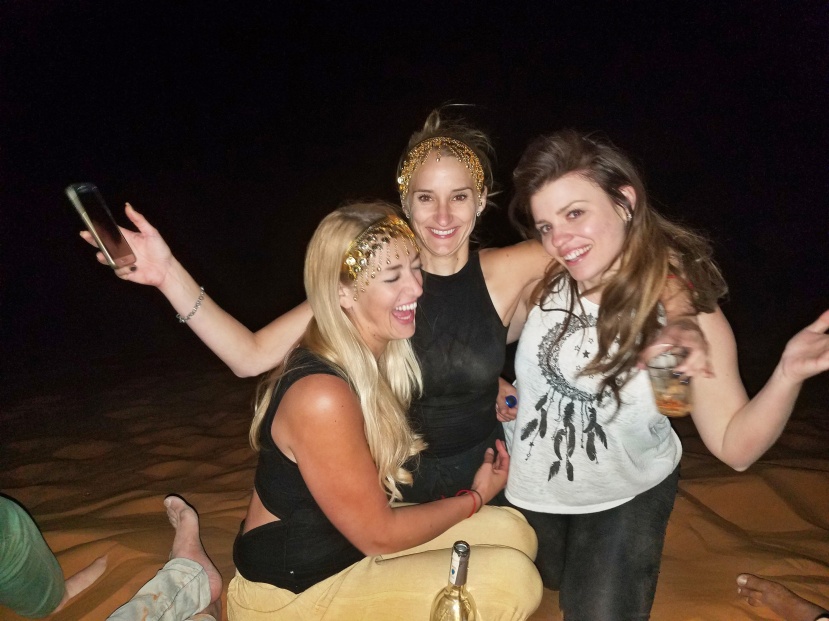 The road trip continued for 2 more days, each filled with stops for views, explaining different Kasbahs and towns, and lots more tagine, skewers, or couscous. Our last night in Marrakech we got henna tattoos, and spent the evening hours drinking wine (there is no alcohol served in the restaurants in the Medina or Marrakech) in our riad and talking about the trip.

I said it a couple of different times….  Morocco is the most ‘exotic’ place I have ever travelled.  Actually, my words of awe went something like, ‘This is exotic AF’.  The colors, the details, the kind people (except the men in the market), and the ever-changing scenery throughout the area we traveled were enthralling. Truly an experience of a lifetime, and I am beyond thankful for each of the ladies that wanted to jump on board a trip full of strangers to a continent none of us had been before.  If you’re reading this and considering going, I HIGHLY TOTALLY SUPER REALLY recommend it, and know a couple of guys who you absolutely have to talk to.  (I will also say, it’s the cheapest 5 day tour I’ve ever seen in my life… everyone and anyone can afford to go).

Morocco you will forever have a piece of my heart, and while I feel like I say this after every trip….  this was my favorite experience to date :). 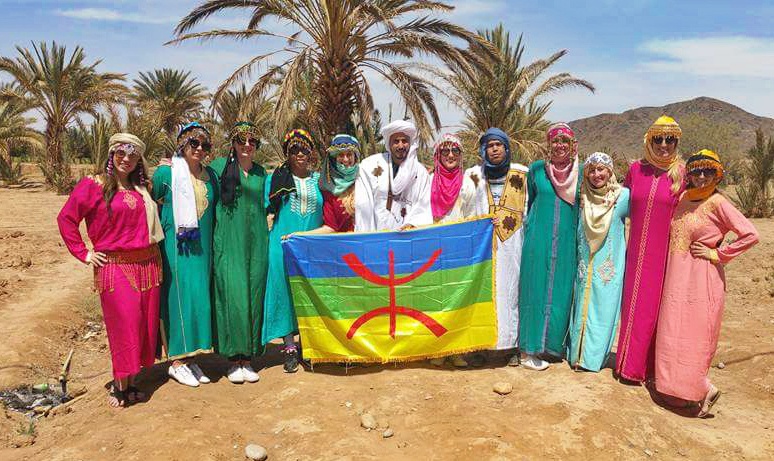 When having your photo taken turns into double dog daring the men next to you to jump over the edge and test the water below… and they do it (and get in trouble by the ‘lifeguard’) 😂.
A month ago myself and my backpack were heading from the Tour du Mont Blanc to Iceland ❤️✈️.
2 weeks ago 2 out of the 3 of us were tent camping and living off of a jet boil in Iceland 😂…
I loved the tough days when you start in a valley and climb to the level of a glacier, or literally through the clouds (like this day), and are able look back at the tiny dots of where you started. The dang, ‘I did that???!’ moments…
The blog post on our TMB trek is up (link in bio), the itinerary for the stages that we self-planned are included as well as our alternative options 📝.
A 4 hour flight and I still didn’t look through all of the pictures from the last 2 weeks and our Tour du Mont Blanc.
Natures ultimate stair-master, the Tour du Mont Blanc 🏔.
If you would have told this little birthday girl 30 years ago that my life would look the way it does now, she couldn’t have fathomed it, and I’m feeling so grateful today ❤️🙏🏻.
Provence, you really stole my heart with the slow paced small villages, kind people, and stunning scenery all along the backroads we cruised with windows down and music up. I came for the lavender fields, and left adoring every little part of our 4n road trip (except the multiple roads in town that were so narrow we had to pull our side mirrors in, swipe ➡️😂🤦🏼‍♀️)