"Is that when people in animal costumes hump each other?"

I had the ummm… pleasure? of witnessing the start of this annual convention a couple of days ago. I was so deeply intrigued I had to look it up, ask the participants questions, and well… sit back and observe the verrrry strange behavior.

We were checking into the hotel Wednesday evening when it became apparent it was going to be a busy night.  There were a number of very ‘dorky’ looking mid 20s-30s guys walking around and checking in as well.  A few were just hanging out in the extremely large lounging areas in the lobby.  The first spotting happened then,  a giant fox was roaming the crowds.  Obviously this sparked a bit of curiousity and I started looking at these ‘dorks’ a bit closer…  2 of the 4 sitting on the couches right behind my crew and I had tails.  Tails… literally, a long yellow and black stripped cheetah tail and the other a black fluffy one I can only assume was a dog tail.  Like hanging out of their jeans all the way to the ground, tails.  Whhhhhat the heck is going on here?!?!  Then I started asking the guys checking us in, and was informed that the hotel was hosting the Furfest this weekend, and close to 2000 participants would be coming.  Ok… a furfest.  I actually thought he said fearfest first, which is slightly appropriate as well.   And then it hit me.

I am not a big fan of CSI or the Law and Orders, etc.  But, one day I was watching a CSI episode when of course there was a murder, and the only suspect they could find was the ‘orange cat’ or some animal.  Well,  the episode unfolds to show this party where everyone dresses up as animals and they literally roll around on the ground together.  Extra large orgie style.  They may fancy the feline in the corner, or chase after the pretty pretty pony, but they have no idea who is in the costume.  The hardest part for me to understand is that they do this because they’re aroused from all this rolling around and humping.  After my lightbulb moment I just had to confirm with the employee that this was in fact,  THAT kind of convention.  Sure enough,  people came from all over for this kind of activity.  2000 people… I was floored!

The next night, I happened to be back in Chicago again… and pumped this time.  I knew from more ‘furries’ as they refer to themselves as, that the convention actually kicked off at 6:30 that night.   This same ‘furry’ that was on our airport shuttle, excitedly mentioned that he was looking online and he was shocked to find that 40 furries live in his neighborhood! I couldn’t help but wonder if this went hand in hand with pedifiles, and how many furries live around me.  Regardless,  6:30 that night I had a date with my coworker at the bar in the lobby to sit back and watch this sure to be entertaining night unfold.

These are the pictures that I managed to take.  At first I felt like I had to sneak and take them, then I realized Duh, these people are prancing through a hotel lobby, they want their picture taken… 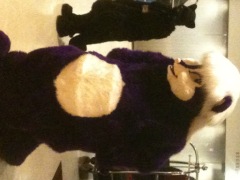 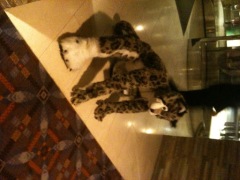 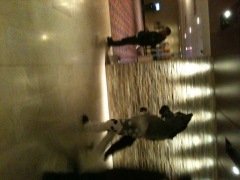 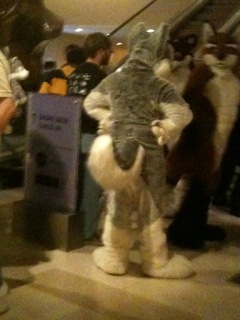 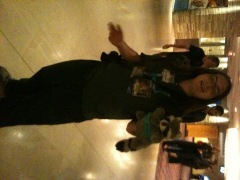 The First officer, another flight attendant, and I stayed downstairs people/animal watching for nearly 2 hours.  At some point, this proud unibrow rockin software developer came over to chat.  He probably heard the animal noises we were making, or the snickers, or maybe just saw the look of confusion on our faces.  He explained the history of the event first.  It’s the 3rd largest convention of it’s nature in the world, there are in fact 2000 people here for the event, and one of those custome made bad boys costs around $2000 each.  The guy with the light up claws and tail was probably rockin a $5000 animal suite.  I bet he had the pick of any of the furry woodland creatures he wanted, haha. Obviously not everyone could afforde the full costumes, hence, all of the tails out of the jeans. We then asked, “Do you pick your costume, or does the costume pick you?”  Apparently this was a great question, because the self named ‘green reaper’ smiled, wheezed, and got super excited.  Turns out, it’s a combination and everyones case is different.  It can be because you feel you have common personality traits, or maybe its an animal you admire and want to be like.   Orrrr maybe it doesn’t really matter because you’re hidden behind a full costume and can be free to be whoever you want and do things you would never do otherwise.  Just my opinion.  The first officer had one main goal, to get to the bottom of the sexual questions.  The guy said well of course we like sex (picture him saying all of this with a lisp… I promise im not making it up), and there was that CSI episode everyone thinks of,  and sure we party and drink and things happen… but that’s not what everyone here does.   I think I zoned out of the convo at this point because picturing these guys in any type of sexual act made me want to throw up.   Actually, we had a pole going between the 3 of us as to what percent had ever touched a girl that was not at the convention.  I went with a very optimistic 60% to start with… by the time we talked to the green reaper and watched for a couple of hours, my percentage had lowered to like 17%.  I gave the highest of us 3.

But at the end of the day, as much as the whole thing creeps me out… it’s for a good cause.  They raise money (and a lot of it) for a charity of choice every year.   Also,  you have to admire people with passion.  Regardless of what that passion may be (and how sketchy I may find it), they do share an extreme amount of passion towards this event and coming together with like-minded people.  So…  while I will never participate in the Midwest Furfest, and will never call myself and hopefully none of my friends ‘furries’… I commend them on doing what makes them happy.  I think.

While looking them up the first night, I came across this video from last year I think…  just to make you feel like you were actually at the Furfest… because I know you all want to go now. HA

Provence, you really stole my heart with the slow paced small villages, kind people, and stunning scenery all along the backroads we cruised with windows down and music up. I came for the lavender fields, and left adoring every little part of our 4n road trip (except the multiple roads in town that were so narrow we had to pull our side mirrors in, swipe ➡️😂🤦🏼‍♀️)
Goals = French tan lines… 😊🚫.
Channeling some Disney princess and summoning the butterflies while standing in a lavender field outside of a 12th century monastery.
Paris is always a good idea, but I’m so glad we came just after it opened back up to (vaccinated) Americans/other foreigners. We hoped to have the opportunity to see it as a local without tourists and selfie sticks everywhere, and that’s just what we got.
This face is exactly how excited I am to be Paris bound right now 😁😁😁❤️✈️.
Put a tree house in the jungle on the beach, but make it feel luxurious.
Mezcal margarita heaven ❤️.
If you ever want to feel small, to get reminded how little we & our problems are, go to Utah.
I have an entire itinerary planned for a trip to Bolivia I never went on a couple of years ago, the highlight was to be the salt flats of course.