MARDI GRAS -Glad I did it, probably wont go back…

I came to a very abrupt and frightening realization after attending 2011 Mardi Gras.

Getting.
Old.
Say it aint so!!! I have experienced weeks of Panama City Beach, trips to Vegas, Miami, Chicago, Tunica, & Orlando… All full of basically just straight partying with friends.  It’s been a blast, an unbelievable good time.  But, I’m sad to say, I can’t do it like I used to anymore (and function).
Granted, Mardi Gras is by far the most extreme partying situation I have ever encountered.  We arrived the Thursday night before fat Tuesday.  We didn’t get in the hotel room until midnight, threw on our cute outfits, freshened up, and were out the door. We were only 2 blocks from Bourbon, well by the time we got a couple of blocks on Bourbon we had our first run in with the cops.  I see my friend lift up her skirt to the people dangling beads from overhead.  When I say lift her skirt, I mean… lift the side of her right butt cheek very quickly just kidding around and teasing.  I’ll be danged if there weren’t 4 fat cops literally right where she was mooning.  They quickly take her over, threaten to arrest her, get all of her info, and inform her that it ok to flash breasts, but you can not show genetalia.  REALLY?  Ok… quickly into the trip, this lesson was learned.  Boobs = ok,  Butt = arrested.  So, we continue on to get our first drink, and end up having a great night…
The rest of the trip was fairly indistinguishable.  It was more or less a blur of festive fun. We started Friday and Saturday at probably my favorite bar in this whole world. The Cats Meow Karaoke Bar.  It’s where I discovered my karaoke performing skills, along with my favorite karaoke partner of course.  If this wasn’t enough of a reason,  they have 3 for 1’s… everything.  This, along with the entertainment factor, is why we spent probably 35% of our whole trip there. 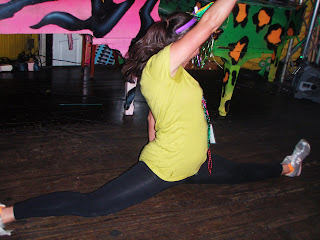 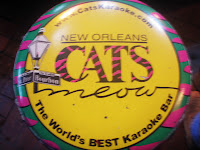 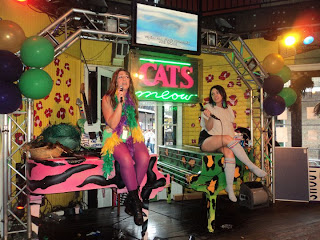 They really should have been paying us.  Now that I have shared my favorite bar, lets talk about my favorite cheeseburger.  Port of Call is the place.  It’s an old pirate bar (how freakin cool is that?) and its dim lit and tiny… the menu consists of about 5 things, a few appetizers, a steak, and cheeseburger, and baked potato.  That’s it… and that is all they need. 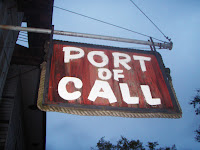 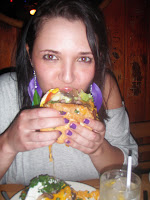 The burger and potato come with mushrooms soaked in this gift from the gods wine sauce, and it’s probably the best thing you’ll ever put in your mouth.  Granted, it could be the level of alcohol we have all had both times I have visited, but seriously… if you are ever in Nola, call me, get off the beaten path, and find Port of Call.  We had a few other tasty dishes, and checked out a couple other fun bars….

Shout out to Dominics, the bar connecting to our hotel that we danced up and down the small bar, and basically dominated the end of every night. 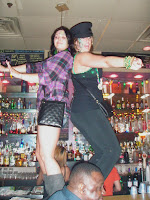 But I know that’s not what you’re wanting to know.

I’m obviously not a guy, and don’t know judging criteria. But I was very disappointed in the boobs.  The people flashing their goods were old, and they were not desirable in any stretch of the word.  The women, nor their sweater puppies.  I’m assuming this is the reason that people just had to throw their beads to any joe shmoe standing under there balcony, or any girl who just flirtidly asked for some.  (hence, why my girlfriends and I have beads on in our pics…  ok, most of them). We saw some body painted chests, the naked indian, a gay guys ass… up close and personal (and I dont want to talk about it anymore than this small mention), and made lots and lots of new friends. 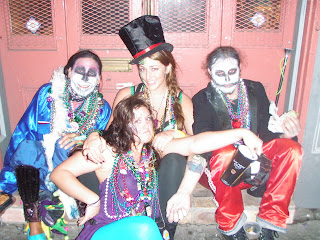 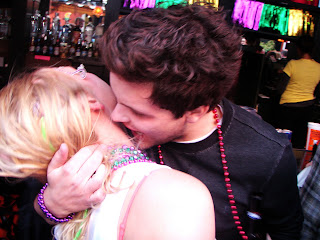 The parades were nice…. nice and scary.  If you dont know (I didn’t before I went)  people are in ‘krewes’,  I discussed how I could join a krewe with the ‘naughty gras’ members, and was told all I had to do was email the guy I was talking to next year.  I didn’t take his email.  But, they pay money… the people who get to ride the floats pay A LOT of money.  This is my theory.  I think they’re pissed that they paid so much money, and they try to nail the little pee-ons watching below with their beads.  I’m not talking just individual beads,  if you aren’t watching… you’ll get knocked upside the head with a 5 lb bag of beads.  Not kidding… saw it happen.  Not to mention, the people are scary.  I would have been horrified as a child watching.  Not that any child should attend Mardi Gras, ever.  Because if you’re a good parent, they wont. I’m not exact a parade pro though, we only saw 2 lol.

The trip home might have been the true reason I still haven’t recovered from the trip.  We checked out at 11,  we didn’t get our car from the valet until 12:15ish,  we were supossed to meet a friend who had gotten his car 45 min earlier up the interstate a couple of hours. Wellllll, an hour outside of Nola we realize that there are 2 ways out of the city.  Yep, we were going the other way.  Turning around we headed back in the traffic to the city we were so desperately ready to leave. We finally meet our friend, get the girl who was riding back with us,  roll 5 deep, and head out…  only to drive 45 past the exit we needed to take.  Again, driving righhhht on back into Nola.  4 hours after we originally left.  This is after I had already gotten car sick and puked behind a quick mart, the driver was so pissed her head almost exploded and I had to start drive.  Needless to say, I didn’t get back to Nashville til 2:30 that morning.  And had to be at work at 8.

Honestly, I couldn’t have picked at better 8 people to go with.  Everyone was super outgoing, loved to dance, and no whining. We even got along great in a tiny tiny little hotel room (yes, all 8 of us… 2 dbl beds and a double airmatress pushed together into one giant sleepover) All in all, it was one of the best times i’ve ever had. The atmosphere of New Orleans, crazy outfits and situations, plus the craziest people in the country.  4 nights in Mardi Gras did me in, but I think everyone should do it once.