Attending an international wedding was one of the many items on my bucket list. My best friend is from Poland and happened to have a cousin getting married in her small hometown of Pila. I got lucky enough to be invited as her date.

To have that cultural experience and mark it off my bucket list as well as getting to see my friends hometown and meet her family, that was enough to be really excited about. I didn’t ask many questions about the wedding, or do any research. I’ve been in 11 weddings, watching nuptials and being a fun reception guest is what I do.

So when someone asked if I was ready to stay up til 5am I laughed and said yes. Yall, they were serious.

I repeat… The wedding was PLANNED to last until 5am.

I couldn’t believe it and became terrified when it was confirmed at the reception.  How will I last until 5am?! There’s bottles of vodka everywhere, I don’t want to be the drunk stranger! Because you know they’re going to try to get the foreign girl drunk. I turned to my friend’s sister nearly panicking and told her that I was going to keep count of the number of shots I did, and tell her each time. If I couldn’t remember what number I was on, I wasn’t doing anymore. Responsible, right?!

Do not judge me, because I will later explain how it’s humanly possible to survive a Polish wedding and take 22 shots of vodka.  There is no way I took as many as a lot of other attendees. But I’m getting ahead of myself.  I’ll start at the beginning. 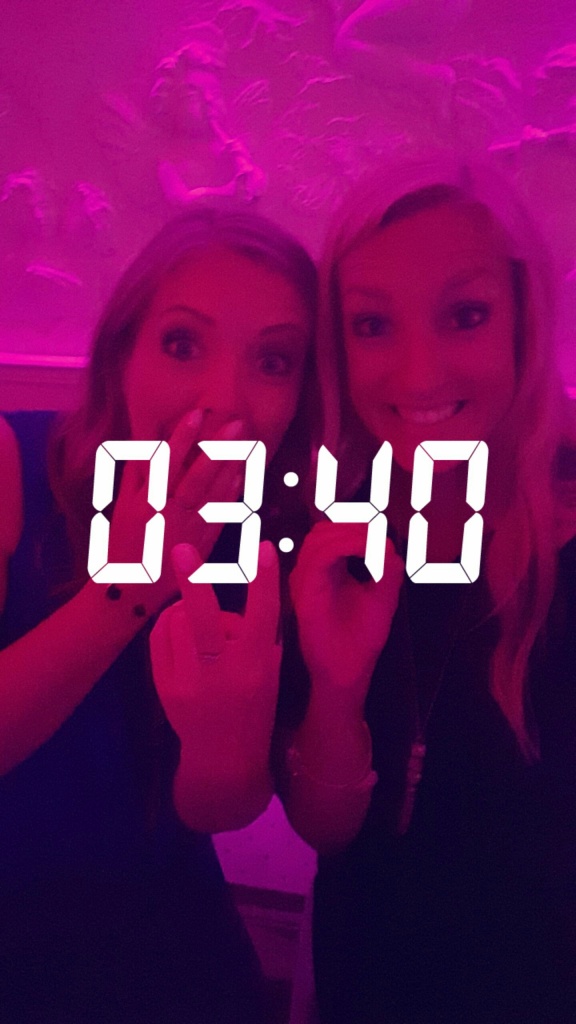 First off, if you’re ever offered a chance, you should attend a Polish wedding. It was beautiful in its traditions as well as an intoxicating party. Literally. I will walk you through a few of the things that were different from an American wedding…

-The bride and groom arrive at the church and walk down the aisle together. This was at 4pm, and there was a full Catholic mass, obviously in Polish.

– Around 7 we arrived at the reception hall, we lined up and cheered and welcomed the new bride and groom upon arrival.  The brides parents had 2 shots, bread & salt waiting for the couple at the end of the cheering tunnel. This gift of bread and salt is symbolic – bread is offered so that the couple may never know hunger, while salt reminds them of life’s difficulties and the importance of learning to cope.  Following the bread and salt, the couple traditionally has their first toast. Customarily, the father of the bride or groom presents the couple with two glasses – one of vodka, one of water. They are offered first to the bride, who must make her selection without knowing which is which. Tradition says that whoever ends up with the glass of vodka will be the dominant partner in the relationship. I absolutely loved that our bride told her mother that they better both be vodka.

-Then everyone lines up to give your best wishes along with money.  Our bride and groom asked for bottles of wine.

-We then sat down and enjoyed the first meal, starters and soup.  Again, I was clueless and was expecting another hot meal perhaps, but never would have considered the 5-6 other servings that were brought out throughout the night.  SO MUCH FOOD.

The DJ is really the one in charge of the show.  Between every 3 to 4 songs he would slow things down with a game or the first dances/cake cutting and everyone would sit down to more food and vodka. I was invited to partake in one of the games.  By invited I mean that one of the guys at my table grabbed me and dragged me out onto the dance floor.  No one spoke english to tell me what to do.  They kept giving hand gestures to take off your top and put it on my partner.  For a moment I thought It was supposed to take off my bra. SOO CONFUSED, until the music started and the other couples were removing the mans suit jacket, turning it inside out, and putting it back on them.  Needless to say, we lost. But that’s ok, we went back to the table, did another song for the married couple to kiss and did another shot. The song is known as “Stolat” or “100 years” and is the same song sung for pretty much every celebration apparently. 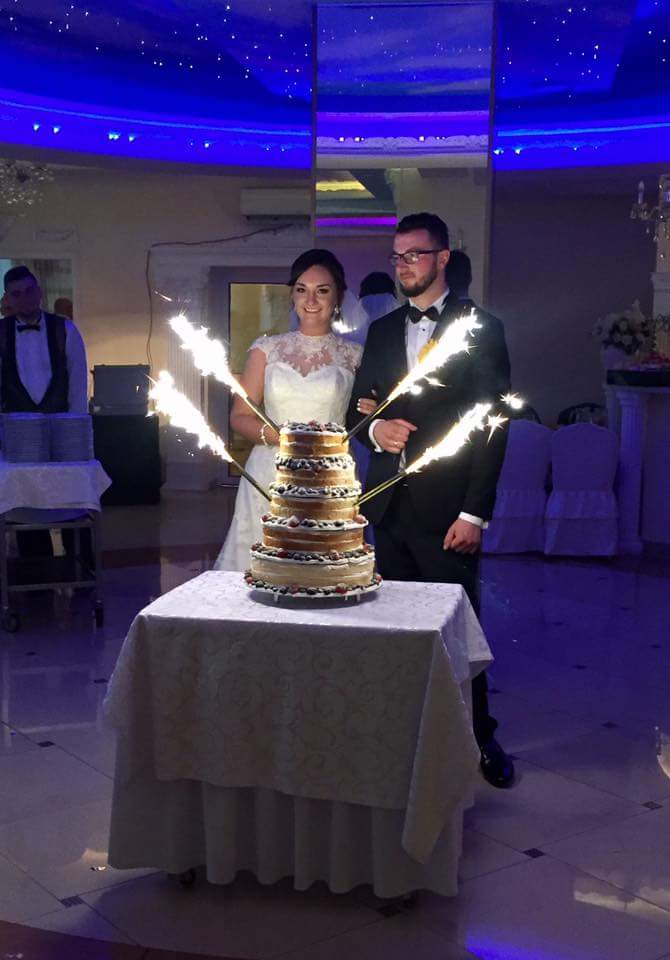 Let’s talk about the vodka. Every guest has a shot glass by their name card.  There are bottles scattered on every table, and I would imagine an entire back room full of them.  It’s not a pour yourself some with a mixer kind of situation.  In fact, you can’t pour your own at all.  You must be poured your shot, and its a group event. All or nothing.  Then your glass is refilled in readiness for the next time. 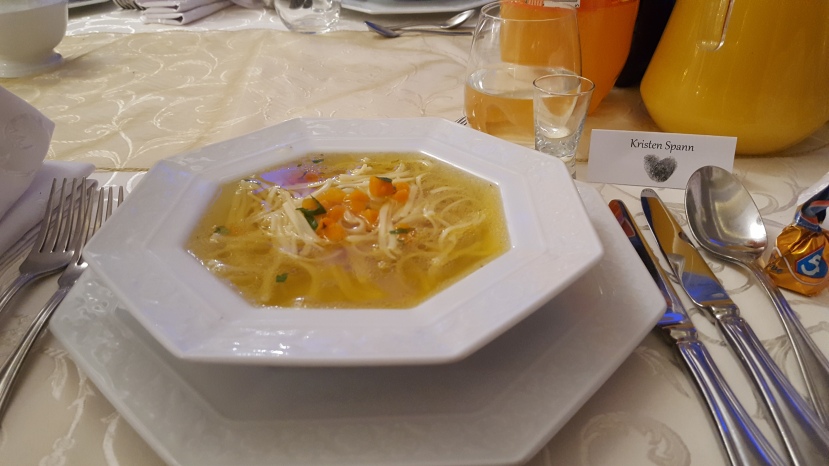 I didn’t know what I was chanting at the time, but I can’t count how many times the guests all screamed, “gorzko, gorzko!”, meaning “bitter, bitter!” in order to demand a kiss from the groom and bride – in other words to ask for some sugar. You guessed it, when they kissed, we drank. The first time I heard the ‘Bitter’ chant, I was sitting next to someone who spoke English who told me it means beat her, ‘umm (nervous laugh) wait, they’re chanting to beat her?’  He replied, ‘Yes… it’s a polish tradition!’. After a few more questions my horrified look faded away with the understanding that we had a major language barrier moment. Bitter, not beat her. Got it.

At some point, I kicked off my heels and danced the night away with a bunch of strangers and had an absolute blast. Polish people can dance I tell ya, & you didn’t see the sidelines full of non-participants. Unless it was their 2 90+ grandmas that were at the wedding until 2 am.  Yes, the bride and grooms grandmas lasted longer at a wedding than you usually do.

So, 5 am came around and we loaded up and went to sleep as the sun was coming up.  If you think that’s all, you’re wrong.

More tradition = more partying. We woke up the next day to meet up with everyone all over again for the ‘casual’ celebration.  This included more traditions, like everyone throwing their coins at the couple who had to then bend down and pick them all up.  Apparently starting married life picking up pennies is good luck.  We ate the leftover food and drank more vodka.  Somehow, someway, I was convinced to drink more.  We started our 5 hour road trip to Gdansk feeling realllll good and missing everyone.

All in all, it was an amazing time and so much more than I could have expected!  There was clearly a lot of love shared between the couple as well as their friends and family.  I think the part that surprised me most was how welcomed I felt.  There are preconceived notions about Eastern Europeans maybe not being the friendliest or open to others, but my experience was far from that.  I was included, entertained, hugged, and even told loved by one of the men (that I somehow had an engagement shoot with the 2nd day). My best friend offered me an amazing gift in getting to meet her family and friends but also to feel so welcomed into another family, culture, and tradition. I owe a huge thank you to Kate and her sister, Daria, and parents, as well as the bride and groom, Milka & Uki.  Thank you soo much for letting me be a part of your big day!  I enjoyed getting to know you both and wish you a lifetime of happiness together :).

Soo, I am now on the hunt for a Polish man to marry or attend weddings with so I can do it all over again!

Backtracking a bit on the road trip to share this spot...
Tell me you’re a traveler without telling me you’re a traveler 😂.
... but what’s not to love?! ☀️🌴🌊
It’s awesome to be in your happy place...
Ok, I hit some of the basic tourist/influencer spots this trip to Tulum 📸.
In my own world...
Get you a friend to travel with that commits and leaves in 2 days notice, and also secretly snaps pictures in the perfect lighting ❤️.
Maho Bay mornin’s 🐢☀️🏊‍♀️
Yesterday morning I woke up to having been broken into by a wild hog at my campsite on St John. It was a battle between the hog and us 2 not very experienced campers for 2 nights, and the hog and Mother Nature most definitely won.