The Battle of an Adult Flower girl and Jellyfish in Kauai, Hawaii.

Vacations typically have highs and lows, but my trip to Kauai took this to a whole new level in a single day.

My friend Dustin asked me to be the flower girl in his beach wedding at a resort on Kauai. Any woman who never had this opportunity as a little girl has felt a little bitty part of her childhood missing, so duh… I’d love to be your 6′ tall 31 year old flower girl, and I’ll be the best damn flower girl of all time. Really, we had lived together in the past and he was fully aware of the fact that I’ve been in 10 weddings. I loooove weddings, but some are more exhausting to be a part of than others and he got to hear all about it. So, I appreciate the fact that he wanted me in his first and foremost, and also loves me enough to give me a really fun outlet.

So, we discussed what an adult flower girl should wear, and I had a dress literally cut up and made into the top, and bought a white tutu. Apparently 6′ flower girl dresses aren’t in high demand. The day of went fabulous,  and I proudly put my fresh flower crown on and sprinkled those pedals to the best of my ability.

It was a beautiful ceremony, and a reception with booze flowing and lots of dancing. So, it shouldn’t be too surprising that we decided to ‘trash the dress’ with our bridesmaids dresses and run into the ocean.

5 of us giggle and take off into the ocean. Not even 2 minutes in I ask if anyone feels like they’ve been stung or something. Another friend said yes, and we hightailed it out of the water.

Immmmmediately, pain. Like when the doctor’s office asks for that stupid how high is your pain on a 1 to 10 scale and you really don’t know the difference between a 6 and 7 pain, this was a 10.

Jellyfish. So, 4 of us feel the sting, 3 badly. What do our intoxicated minds immediately think of?… Who will pee on us?! No one had to go, so we went back to the fire pit where our friends and coworkers were and asked, or more demanded, for someone to lend us their urine.

Lucky for us, Marlon needed to take a leak. Let me tell you, when you’re experiencing 10+ pain you don’t think about things like, where’s a cup? We went to a dark area and he (who I had never met) sprayed a golden stream on my friend’s arm and my leg. Not my best moment. 10+ pain tho, remember.

I’m sure a lot of yall are aren’t going to be surprised to hear this, but it didn’t do anything. That’s a myth, don’t do it. Next idea… chlorine. (And to wash a man’s unnecessary pee off of my leg). Nothing. Chlorine did nothing. We returned to the fire pit to Google how to make it stop. It’s around this point that we realize this isn’t normal. I’ve been stung before, it hurts, it’s painful, but it goes away and well it’s that weird 6 or 7 pain level. One girl is crying pretty bad with the pain, I’m starting to feel bad pains in my lower back and a weird scratch in my throat, and the other decided to try to find vinegar and go take a hot shower (Google funded info).

Not even 20 minutes later I realize it’s becoming harder to breath. If you know me, you know I don’t freak out easily, because I’m practical and that’s really not going to help anything, and I’ve always considered myself to have a high pain tolerance. I told my friend I didn’t quite feel ok. We were already all debating the hospital. But frankly, it felt silly to go to the ER over a little jellyfish sting.

We ran into a hotel staff member who asked what was going on, I told him I was stung and I can’t breath very well…. at this point it was getting harder to talk as well. He immediately said I think it was a man o’ war, and called 911. Let me point out that Portuguese man-of-war are typically found in the Atlantic ocean, occasionally in the Indian and Pacific. The nickname according to wikipedia is floating terror.

Ok, that 10+ pain makes sense now. A deadly freakin venomous jellyfish had somehow managed to seriously sting to 3 of us in a 1 minute span on the beach that we had spent 2 days swimming on with no sign of any fish at all.

Remember the highs and lows of vacation I mentioned. This was one of my all time lows.

Paramedics show up, I was put on a stretcher and into an ambulance with an EMT who continually said are you sure you want to go to the hospital? Your throat doesn’t look swollen… meanwhile, I have completely sweated through my tulle flower girl skirt and top (ok fine, they were dry because we didn’t actually trash the dress, they were left on the beach). My hair is plastered to my head. I can speak 4 words at a time max in response to his questions. At this point I have no idea what exactly is going on, or that I had been poisoned by a jellyfish. I just know I am not ok.

As if being poisoned by a sting that registers on a 10+ pain scale isn’t bad enough, I had an allergic reaction to it.  Soooo, after my roommate and the other EMT pointed out that I was clearly having a reaction and needed 1. Drugs and 2. The ER, we were on our way in the ambulance. The epinephrine caused convulsions and shaking all over my body for ohhhh 3 hours, and I couldn’t lay comfortably because the venom had affeected my nervous system which moved to my spine/lower back causing the terrible back pains.

Nothing is too exciting past this point. I saw the Dr who confirmed it was either a box jellyfish or a man o’ war, and I while there was still pain in the sting, I could at least breath. If you’ve never googled either of these ocean demons… here you are. 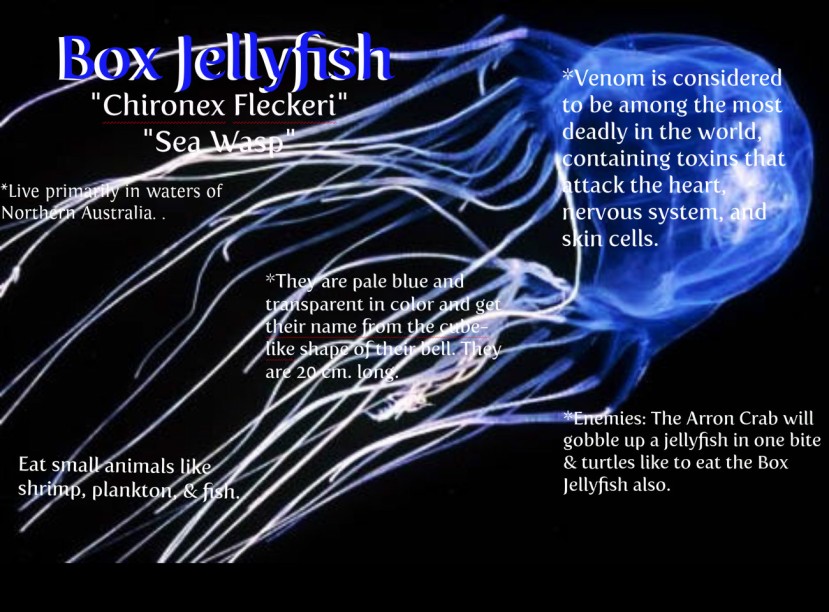 We later found out that this is rare. The hairdresser who was awesome and came to hang out at the pool with us the next day was shocked, and said in 8 years on the island she’s rarely seen them. It turns out that 8 to 10 days after a full moon they like to make an appearance for a jelly reproduction party. It was 10 days after a full moon and we are definitely pregnant.

That sting on my thigh and the little ones along my leg hurt worst than anything I’ve experienced before, and it has been a full day as I write this and I’d say it’s still not gone completely. I told the grooms that I will never forget their wedding… the highs and the lows. 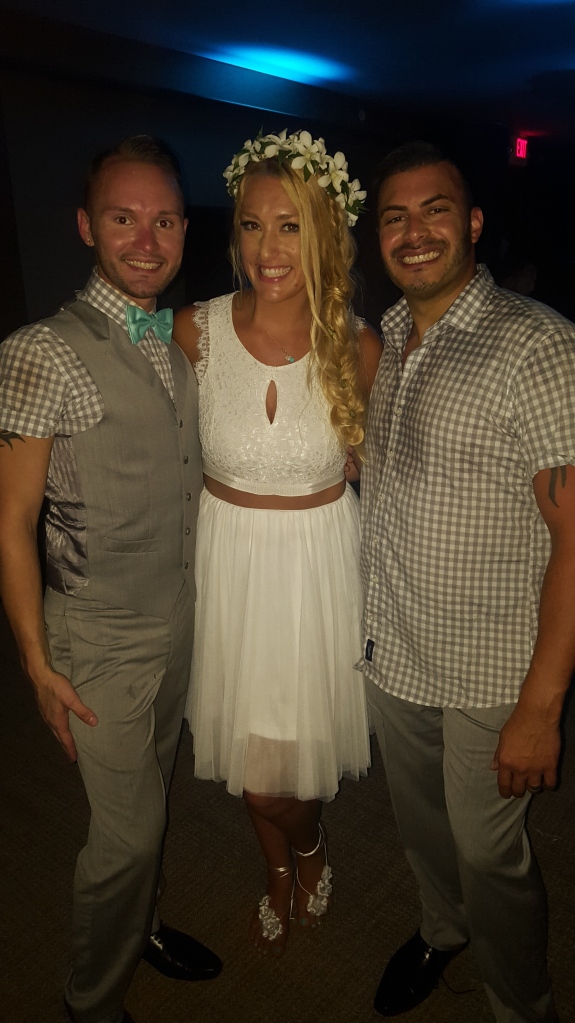 & I just want to reiterate that you shouldn’t have someone pee on you for a jellyfish sting. Whoever made that up is laughing all the way to their grave.